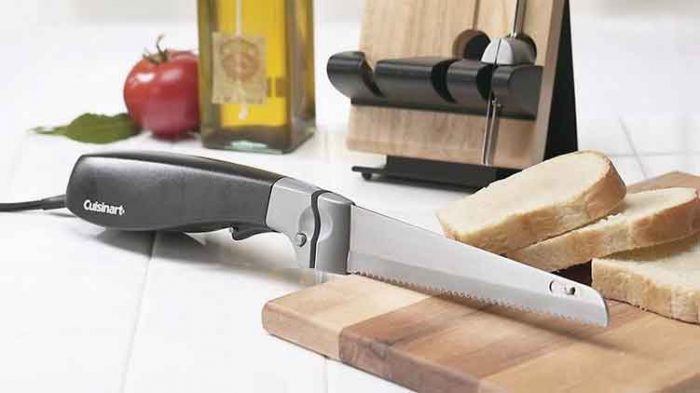 My husband and I had the same Hamilton Beach Electric Knife since we got married over 30 years ago. While it still worked the blades were getting dull and since it was so old I just decided to get a new one instead of replacing the blades. I looked primarily at Amazon.com and found one similar to what we had. The Hamilton Beach Electric Knife 74250 seemed like just what I needed. I noticed quite a few bad reviews but decided to give it a try for the low price of $19, I figured I did not have much to lose.

What’s in the box: The Electric Knife with an attached power cord, The blades, a carving fork, all in a plastic case. Also directions for use were included.

The Knife: The 100 watt Hamilton Beach Electric Knife was smaller than our previous one and I felt that it fit into my hand better and was easier to use. It has a non slip trigger that you press to carve. As a safety feature when you stop pressing the trigger the knife stops. The knife is contoured so that it fits nicely into my hand.

The Blades: The blades are stainless steel and 7.5″ in length. It is suggested that you wash the blades by hand in hot soapy water. I think this is because the ends have plastic stops that help them fit into your knife. If they were to melt from the heat of your dishwasher, it could make them not fit. The blades consist of actually two blades that fit together attached at the end with a metal piece that allows them to move side to side but still stay together. They can also be separated completely for cleaning. The ends of both slip into the knife and click in place. There is a button on the knife that you have to press to remove them. The blades also come with a clear plastic guard. After they are washed and dried, you can use this to protect the blades. I actually use it to protect my hands because I throw the blades into my knife drawer with the cover on them, click this over here now.

The Fork: The carving fork is a typical 12″ fork with a black handle. I frankly did not need this since I already have a couple others and would have preferred to buy the knife without the set. It seems though that you can only buy this in a set.

The Case: The Case would be nice if you needed one, but I do not. It was not impressive just a basic plastic case that you would fit everything into if you so desired. The case measured 15″ by 5″ by 2-7/8″. I did not need mine so since it was plastic I threw it in the recycle bin.

Testing out the Knife

I actually had the knife for awhile but the the other day I made a Butterball Turkey Roast so I was excited to get it out and test it. I had heard terrible things about it in the Amazon reviews. It seemed people either loved it or hated it. I was really expecting to like it less than our previous one based on these reviews.

I was pleasantly surprised to find that the knife was even easier to use than our previous one. The old one was definitely bigger and bulkier in my hand and this one fit nicely and was way more comfortable to use. It did not feel too heavy or two light.

The blades fit nicely into the knife and I had no problems getting them to snap in place. When I pressed the lever to operate the knife I felt that the lever was easy to push and hold down. Some people in reviews had stated that it was so hard to hold it down. I felt it was extremely easy to hold down. Granted I did not carve a giant turkey, but for our uses this knife performed beautifully.

The blades were nice and sharp and went through our turkey roast very easily. When I was done I pushed the button to release the blades and the came out without a problem. I have to say I was very pleased with my purchase!

I only paid $19 for the Hamilton Beach electric knife, blade fork and a case on Amazon. I have Amazon Prime so I did not even pay for shipping. I can not imagine a better deal. I could have done without the case and fork, but I think for new people starting out these are nice to have. I will give the Hamilton Beach Electric Knife 5 stars because considering the price I felt it did a terrific job.